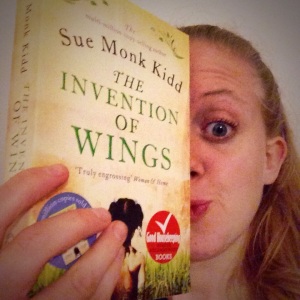 Handful, a slave girl, is given to Sarah Grimké on eleventh birthday. Sarah is violently opposed to slavery but is not allowed to free her. The two of them grow to adulthood with this and their mothers hanging over them, coming together and falling apart as consciences and circumstances dictate their courses.

This was a well written, enjoyable, informative and gripping story with great female characters and an interesting perspective on history – but for me there were a few problems always nagging at the back of my mind.

Like Sue Monk Kid’s The Secret Life of Bees, this book does very well for female characters. The relationships here were predominately between women and girls, with romance largely assigned second place. The mother-daughter and the sister dynamic is important and very different for both main characters, and both of them are women of extraordinary strength and resolve who strive to (and Sarah does) live influential lives without much input from men.

And the plot unrolled at a good pace, managing to navigate the two first-person narratives and the few decades that the story spanned with the characters changing and growing convincingly. We were equally invested in the two characters, and concerned with both of their attempts to break from convention. The relationship between them was less central than one would think, but a good hook to keep the story together.

But I find white people writing fictional histories of black slaves a little discomfiting: though I’m not sure why, as all people ever do is write other people’s stories. We should be used to literature travelling through histories and cultures to borrow tropes and ideas, but I think two things particularly make this troublesome for me: the possibility of a smug superiority invading our reading, and the contrast to other extremely powerful and often authentic (by which I mean, written by people who experienced it) stories.

The practice of projecting our values onto the past: of investing Sarah with modern sensibilities about slavery is a little troubling. It allows the reader to feel a kind of self-satisfaction: we don’t have slaves, she is right, oh how dreadful. I was glad to find out that Sarah Grimké was a real person, and that a lot of her story is accurate. But I think it might have been a good idea to show where she came by her revolutionary ideas in the first place, to avoid that certain smugness pervading the reading process. Of course, slavery is utterly and totally wrong. But there are plenty of things now that are utterly totally wrong that we ignore utterly and totally – or effectively, at least.

And though it was interesting to find out more about some of the events of the time, it felt like the subject matter deserved some more clout. I did an African-American literature module at university which included books of such power that made me so angry and so sad – whereas though this is probably impeccably researched, (Handful’s narrative sounds genuine – you know, to me, a modern white Brit) to me it lacked real passion or depth of emotion.

Should all this matter? I’m not sure. But for me, though it was an enjoyable and well-written good novel, these questions will cloud my memory of it. But I’d recommend a read – what do you think?

Thanks Bookbridgr for the review copy.