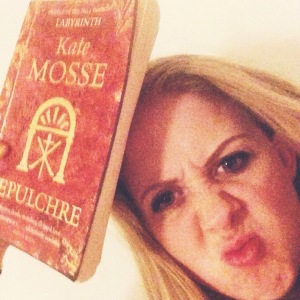 Two time lines run parallel; in 1891 young Leonie Vernier moves to Domaine de la Cade away from Paris and in 2007 Meredith Martin arrives there from America. Both get drawn into mysteries both personal and spiritual as they come up against darkness in people and in the old estate that they explore; an old sepulchre in the grounds hides secrets that will change both of their lives forever.

I’ve also read Winter Ghosts and Labyrinth by Kate Mosse. And I’ve enjoyed the worlds of the books; been drawn to the characters, sucked into the mystery and enjoyed the play between the different timelines. But you know when you keep persisting with something hoping that it will get better? Sadly in each book I was ultimately left hugely disappointed by the ending.

In each case, I think they have not seemed enough. Labyrinth and Sepulchre particularly are lengthy books, and to come to an end that seems a final neat tying of a knot rather than a grand finale leaves you disappointed.

The dual timeline device was in every single book, and as a device it works pretty well though switching between them can be jarring. You see the parallels between the times, and though I almost always find myself more invested in the earlier timeline, eventually I got involved in both of them. But perhaps to make the ending more satisfying there should be some more substantial connections between the two; a more pressing sense that the endings of each depend on the other.

The characters are pretty good; I like that she has female characters who have motivations and missions totally separate to love; though this usually occurs too. She seems to portray human emotion and thought processes well, and handles a lot of backstory without it getting too confusing.

The ending of this book in particular, however, just felt unexplained. Whereas most of the way along the story seemed to be fighting between the supernatural and personal elements at the end I was expecting them to merge together and have some high drama, explanation and resolution. Sadly, no. Stuff just happened. The tension loosened and loosened in the last third of the book. It felt as though the supernatural mystery may as well have been left out – it hardly changed the story at all.

So though I like the mystery and flavour of historical France, and enjoy that the books are pretty hefty, I think the endings sour the taste of the books too much for me to venture on any more. Plus this one was pretty dark without even any reason to be. No thanks, The Taxidermist’s Daughter.

One thought on “Disappointing endings: my review of Sepulchre and why I won’t read Kate Mosse’s The Taxidermist’s Daughter.”