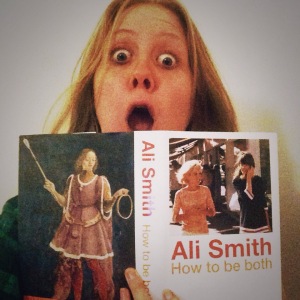 George’s mum has died, and she’s trying to live life in that reality, balancing her little brother, passionate new friend, father, school and the memories of her mother that portray a complex picture of a person. These tell of the time her mother flew her and her brother to Italy to look at a particular figure fresco in a house in Italy. And she has one question that she keeps asking: can you remember when you’re dead?

Franchescho is dead, but is remembering. An artist responsible for beautiful artwork and frescos on the inside of an Italian house, memories from life, family and love overwhelm the artist as they look upon an unfamiliar world. An unfamiliar world where a teenage girl is collecting pictures of a dead woman.

This book and it’s two completely distinct sections is meant to represent a fresco: two separate pieces set opposite one another. Ready to compare and contrast. A technique that works just ridiculously well. Because you are not here presented only with the meaning, depth and questions of two separate stories (which would have been enough, so deep and intriguing are they both) but challenged again. What can they mean when set against each other?

Each half of the book is brilliant. It draws you in: the characters, their settings and thoughts and interests are fully formed and enough on their own. I wanted to know more about each of them. The story of George made my brain marvel again and again at how much better it was than a teen novel telling the same sort of story, the artist intrigued and taught me things that I found myself desperate to know. I found myself sad in both cases not to find out more of the story.

PLUS I learned that the order in which the pieces are presented differs in different copies of the book. That is just amazing. I can’t imagine how different the experience would have been, seeing the teen story through the renaissance rather than the other way round – but what a great concept.

And the title? How to be both what? I suppose it refers to all sorts of things. And perhaps is a good starting point from which to consider the two parts of the book against each other rather than separately. Gender is a big theme here, how to be both genders. As is death – how to be both dead and alive? As is art, as is sex, as is truth, as is love, as is memory. Or is it simply the book wondering: how can I be both about a teenager and a renaissance artist?

I think this book was marvellous and genius. For it’s experimentation, concept, humanity, questions and being extremely readable at the same time. Almost all of the time. There were times where it was hard to get into the renaissance narrative as it was told as a stream of thought, and there were sex scenes that I’d rather not be in there. But generally – wow!

I love that the third part of the book – the comparison between the two parts – doesn’t even begin properly until you have finished it. And I’m not sure I’ve even finished that bit now.

2 thoughts on “The one I’m still thinking about: the prize winning book in two halves How to be both by Ali Smith”