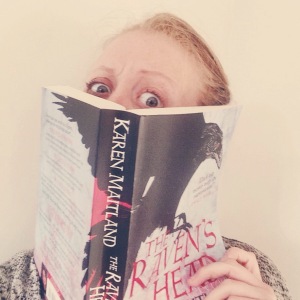 A little boy is removed from his family and renamed, forced to live in a monastery with other boys in fear and horror at the secret rites they are submitted to. A scribe, angered by his lowly status, tries to trick his way to power, but finds himself on a long journey carrying a precious and treacherous silver ravens head. And a young girl is drawn unwillingly into the spells, potions, schemes and obsessions of the evil Lord who her village shuns. As their stories weave forward the three are drawn closer together by forces they cannot explain or escape.

I quite enjoyed reading this book. The world and mysteries created were interesting and fairly enjoyable to spend time in, but the action seemed too slow, and the characters not sufficiently fleshed out to sustain my attention any further. So I’m glad to read this one… but despite it being the set up to a whole series, I’m not tempted to embark on the rest of the journey.

Despite this being a significantly chunky book, most of it felt like it was the beginning. The development of each of the three story lines felt like a long set up, and it was probably only in the last quarter of the book that I felt like it really got going. And even with that, our characters were always reacting to their admittedly bizarre circumstances – there was little sense of agency or their actions doing very much at all to change what was happening around them.

And they don’t understand what is happening – and we don’t either. Basically it’s a lot of dark magic, but neither our main characters nor the reader really know the rules, significance or likelihood of it actually working. We’re in the dark. It was reminiscent of Kate Mosse’s books, which I find frustrating for other reasons – but less well realised.

I think most of the above is because it is the first book. It’s a set up – but too much of one for my liking. From the ending it seems that is going to change dramatically for the next book, but this change was too slow and too long for my liking. I think even the same story as was presented could have been told with more pace, brevity and with more warmth in the characters, even if they were on the same journey. I say journey – I’m not sure they learned very much.

The three story lines, despite their slowness, were done well. We switched often between them in fairly short chapters, but I was equally invested in the three of their mysteries, though I certainly liked the girl character the best.

So, it was pretty good and amused me for it’s duration, but I won’t be embarking on another book in the series, as it all took rather too long. I want to be left wishing I had more of the book, not counting the pages until the end.