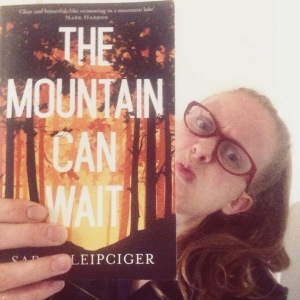 Tom is father to Curtis and Erin. Elke, his mad wife, committed suicide when the children were young, leaving stoic and emotionally inexpressive Tom who is happier with trees and nature than people to bring up two children. When as a teenager resentful Curtis makes a drastic mistake their loyalties and instincts are tested.

I found it really, really hard to get through this book. I loved the title and quite liked the cover page, but beyond that found it very hard going. After the initial incident which you presume is going to provide the action for the story, we wander around for three quarters of the book with Tom looking at trees, then get down to the story at the end.

I couldn’t connect with any of the characters. For the most part we followed Tom, who completely lacks emotional intelligence and self-knowledge, to a very frustrating extent. There’s lots of stuff about his work and the trees and the mountains and various animals that he kills, and I suppose there is supposed some beauty in the role of nature there, but I just found that I really didn’t care.  In some ways the themes of nature and humanity (or lack of it) were reminiscent of All The Birds, Singing, by Evie Wyld, but in no way executed even a fifth as well.

We followed Curtis a little, and he was a bit more sympathetic but still, I wasn’t really drawn in.

Not that there wasn’t interesting backstory and ideas around. Their family life as we discovered it was traumatic, difficult and fractured, and the misunderstandings and assumptions were clear. Humans, and a family, muddling through life when they don’t really know how to connect to each other. But I largely found that I didn’t care.

I think the missing ingredient was the daughter, who I’m pretty sure was called Erin. She wasn’t really featured at all, but maybe her presence would have changed things a bit.

I was glad that I finished, partly because it did pick up a bit toward the end but also so that I do know that I’ve not missed some great ending that would have altered my view. I’ve read a few reviews trying to work out what it is that I’m missing here… but to no avail. Sorry Sarah Leipciger, I’m not convinced.