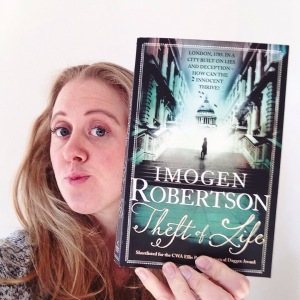 When a former West Indies planter is found dead and clad in a mask used to punish slaves out on the street, a black boy is promptly arrested. But Harriet Westerman and Mr Crowther with promptings from servant and former slave William Geddings (who has secrets of his own) think there is more to the death than meets the eye. Meanwhile Francis Glass, another freed slave and a printmaker, is shocked when the woman he loves is killed – and when he realises that there are deep secrets threatening to be revealed that powerful slave traders want to keep secret.

As you can tell from the summary, there is a lot going on in this book! Various mysteries unwind around each other, touching each other at the edges, the complex characters presented revealing secrets and connections as we follow on through. Though I was a little thrown at the start of the book to find that it is in the middle of a series, after a little perseverance I found myself engrossed. The mysteries and characters presented were intriguing and it was exciting to get a glimpse into a world post the abolition of slavery in Britain – but not abroad. The stories and views presented by the characters, the scenes we saw and were varied and interesting; a spectrum of society learning to change mindsets. Or not learning, as the case may be.

The characters themselves were marvellously varied. Each seemed had real depth and intrigue to them; and drew you into their stories with ease. Bizarrely, however, I felt this much more strongly with some of the characters who I assume are in this novel only than with the two main sleuths: Harriet Westerman and Mr Crowther, whose persons, history and relationship remained a bit of a mystery. I have no doubt that this is because I joined in the middle of the series, and there were attempts to catch the reader up – but still I felt a little disjointed from them both.

I really enjoyed that there were some proper, real, central and excellent child characters. They could almost have stepped out of a children’s book, except they were perhaps more fully realised. Their presence puzzled me to begin with, but I was delighted that they had a real and important impact on the plot.

Though it was a shock to jump into the middle of a series, and therefore took me a while to get into, I enjoyed this book, and may well read some more of the series. I’d recommend this book… but probably read in it’s proper order!