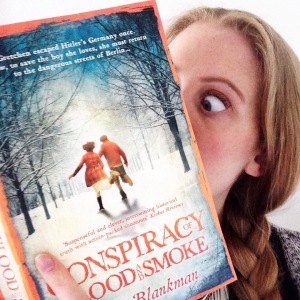 After the gruelling and dramatic adventures escaping from Nazi Germany under her adopted uncle Hitler’s nose with her Jewish boyfriend Daniel in book one, Gretchen has been taken in by an English family and for the first time ever has a place she likes to call home. But Daniel isn’t so well placed – and when he hears his brother is ill he rushes back to Germany. Next thing Gretchen hears he’s accused of murder – and she makes the dangerous journey to Berlin in an attempt to clear his name, encountering gangs, the SS, secrets and old Nazi acquaintances galore as she tries to pull one over on Hitler yet again.

I was initially doubtful about how another book could come out of this. Gretchen escaped from terrible circumstances and crazy happenings – and now she’s going back! What! And once she was back in Germany, the drama came thick and fast. The coincidences were far too many, the story completely implausible – but terrific fun. It’s pushing beyond the limits of believability, but if you accept that, it’s gripping and exciting.

Action and conspiracy are packed into this book, making it very much a page-turner. There is very little let up from action and Gretchen hardly even has time to worry about her relationship with Daniel. Oh wait, there’s just about time for that. But once I was into the story, which as soon as Gretchen left England got into full swing, I was hooked.

The relationship was a bit annoying. I know it’s a book for young adults, but I wasn’t ever quite convinced that I knew Daniel well enough to care for him enough. Gretchen is very heroic and determined to save him but I’m not sure I saw enough of why. They’re totes devoted and in love and stuff… but it never rang quite true for me.

And Gretchen is a little too heroic. She uses her scant knowledge of psychology to best many extremely intelligent adults throughout the book; and gets away with all sorts of things… but then, it is a story. We’ll let her get away with it.

Strangely one of the other problems I had reading this book was trying to remember which fictional wartime Germany I was in. I kept having flashes from scenes and happenings from The War of Flowers, by Jane Thynne, which in many ways does a similar thing for adults – slightly more believably. I was trying to remember which version of particular characters were the ones I was meant to know – but generally gave up in favour of just finding out what happened next.

This was a fun, gripping and exciting read that opens up some of the history of Nazi Germany, and would hopefully get teenagers excited about learning the real history too. And so long as you tell yourself firmly to enjoy it and accept that it’s pretty ridiculous, I think most people would enjoy it!

Read my review of the first book here.

Read my 15-year-old sister’s review of the first book here.