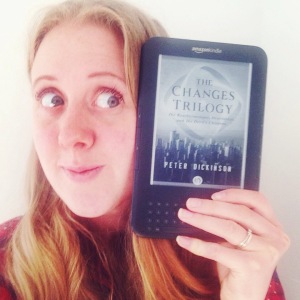 No one talks about The Changes. And, since them, no one likes machines. Girls have to wear skirts. Witches must be burned. And anyone who thinks differently has quickly left for France. Nicky was left by her parents, and joins a group of unaffected Sikhs to help them work out how to live in this new world. Madge and her cousin Jonathan find a not-quite-dead witch, and rescue him on an adventure in a forbidden tug boat, and finally Geoffrey, a weather maker, finding himself in the point of being drowned, sets off on a quest with sister Sally to find the source of The Changes once and for all.

I really liked this trilogy! It’s an old one, and has all the elements of great kids adventures stories. Good kids against misguided adults, characters with skills, terrible danger and lots of action. Each book was about one of the three characters, and though they were barely connected at all put together they gave a good triptych of The Changes.

One thing I liked was that, especially in the first two books, things weren’t explained too much. The Changes had happened, and we got on with the adventure of it, without having to question too much. This was the state of mind of the characters, and so we went along with it. Apparently originally the books were published in reverse order, which would have changed that, but I liked it this way.

The characters were great. Very classic children’s book heroes; plucky and scared and clever and scheming – but there’s nothing wrong with that. I liked the friendships that were portrayed, and that things weren’t too easy. Even baddies weren’t all bad, and our characters had real complexity to deal with.

I really enjoyed these books; they have a good children’s’ classic feel, though not outdated yet. I suppose a bonus of technology having disappeared is it doesn’t matter that the tech isn’t completely up to date! A great read, highly recommended.