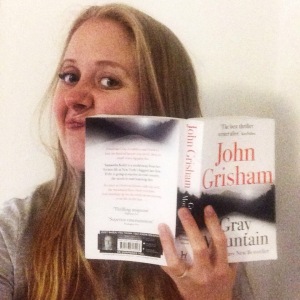 In the midst of the financial Samantha finds herself kicked out of one of the biggest legal firms in the world, and sent to make her own way in a non-profits organisation. She finds her way to Appalachia, where her new colleagues help people who have no money – and where the intriguing Donovan is chasing the mining companies who are ruining the landscape and killing people with their greed and negligence. She is reluctantly drawn into the battles, never quite sure if she misses her desk job or not…

Now, this was a good book. The journey of Samantha was pretty compelling, the topics covered, from city girl in the country to the mining controversy, her relationships to the practice of law, were interesting. But from Grisham, I found myself expecting something more than this. It’s probably my own fault. I’ve not really read any of his stuff, so am basing my expectations on his fame – but I wanted a bit more to this book. I found myself surprised when half the book had gone by and it felt like it was still setting the scene. Of course, it is fine to tell the story it tells, and there was a lot to say, but I was expecting things to escalate further than they did.

Samantha herself was probably a part of this problem. She was only ever a reluctant participator in events; though she was certainly emotionally involved, she was never certain as to her stance or motive enough to act compellingly. It was a story of her own development, really, and finding meaning in a life that had been consumed by her dull job, awful bosses and New York city life, but I still wanted a bit more than we got.

Probably I wanted the journey to move faster, and her to have got further along it by the end of the book. In lots of ways it was good; great characters, good plots and sub plots etc – but I spent the whole time waiting for something more.

4 thoughts on “I expected more from you Grisham – Gray Mountain, a review”