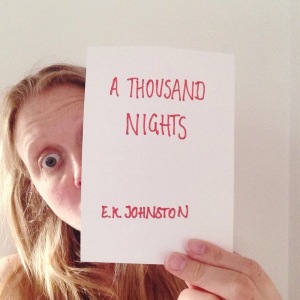 When the infamous Lo-Melkhiin whose 300 previous brides died comes to her village to choose a bride, our unnamed narrator knows he will choose her sister, the most beautiful girl there. Determined to save her, she ensures she will be chosen, and journeys with across the desert. Plunged into a new world where death probably awaits her every morning, she finds that her sacrifice has bestowed her with powers that might just change everything…

I expected, and wanted this to be a retelling of Arabian Nights. Understandably, surely? But though a lot of the basic set up was the same, this story really was about magic, power and demons rather than stories. Which I was a bit disappointed by – I’ve yet to read Arabian Nights (SO I COULD BE WRONG ABOUT THIS WHOLE THING) but have always been fascinated by the idea of stories so compelling that they save Scheherazade’s life night after night. That disappointment aside, the story was pretty decent and kept me reading!

She still told stories, but instead of their own merit and compulsion gripping her husband, they are invested with power – they begin to come true. Though in itself a fascinating storyline which is interesting as it develops, to me it seems to be taking out the most important part of the original story. And frankly the stories she told were pretty dull – it was little more than a few details about her home life each time.

I think the unnamed narrator thing was meant to suggest that she is, perhaps, Scheherazade. In which case the message is: her stories weren’t actually that good guys. It was actually this power.

Despite all of this, it was a gripping story, with interesting facets and characters and the main character’s journey was compelling, her growth in confidence, her relationship with her sister and her various mother figures. I enjoyed reading it, and despite a slightly messy ending I think it’s a decent YA fantasy.

But I think it would be better off not referencing Arabian Nights at all.

I got a review copy of this book from Pan Macmillan in exchange for an honest review. Voilà!