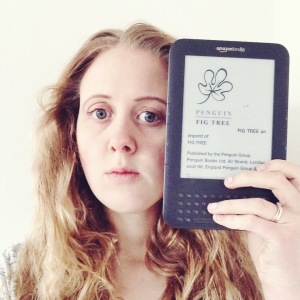 Peggy and her father flee what she is told is the dying world to make a survival home in a hut in the middle of the wilderness. They exist there for years, their last traces of civilisation gradually dying, with Peggy obeying her father and exploring the natural world. In the future, Peggy tries to piece together her real life from the lies that she was told…

This book is a big deal. It’s title is fantastic. The premise could be interesting. But really, I found it all rather disappointing. Sure, it was quite a clever depiction of the negative power of a parent over a child, and a child’s stunted development. But really, I could see what was coming a mile off, and found it all rather sordid and disappointing. There was certainly something missing from making this book work.

I’m really trying to see what the good things are in this, still. I mean, I guess it’s a pretty clever depiction of a child being abused to by her Dad? Of the things that the brain will do to try to normalise situations?

And I did keep reading it, so I was curious, I suppose, to find out how on earth it was all going to end up. But when I found out, my reaction was probably ‘oh’ not ‘OH!!!!’. I just left it feeling rather disappointed.

Or perhaps that was the point? Like the main character, we are lulled into a storybook, interesting survival tale, but also like her we are let down and dumped back in the real world, full of disappointment. Perhaps this is the secret that I missed?

And if so, that is pretty clever I guess. But not really the kind of thing I’d like to read, or recommend. So, I can see that it’s maybe impressive, but not for me.

Thanks for the ARC anyway to Netgalley and to the publishers – I’m glad to know what everyone’s talking about.