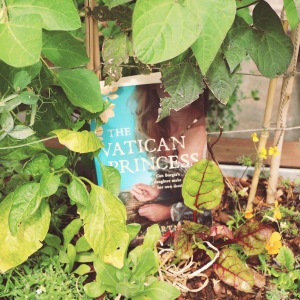 When Lucrezia’s father, with a mixture of force, bribery and persuasion, is made Pope, Lucrezia becomes a pawn in the power games always going on all around her. And her beauty is her chief weapon; but this works against her as often as for her. Trying to navigate between her brother’s deadly rivalry and desire for her, the husbands who try to wrest her loyalty away from her father, Lucrezia finds herself right in the middle of huge historical events as well as her own personal trauma.

I was hoping here to find out some more about a historical period. To discover more about the life of a historical figure I hadn’t heard of before. And, this kind of happened. But mainly this book seemed to be making the oh-so-laboured point, people in the olden days actually had sex. I mean, it was pretty much all the book was about: Lucrezia and the many men she attracted. I was hoping for a fuller picture.

And sure, historically, this must have been true to a certain extent. She was attractive, she was married a couple of times. But I can’t really see that that is all that was of importance in her life. Here, so many other elements are ignored or brushed aside, and Lucrezia’s life is completely taken over by her sex appeal, and that of the people around her.

Apparently there is questioning among historians whether she was actually playing the game herself, or simply being manipulated by her various relations. This book certainly casts her as a victim, she is pretty much powerless to do anything at any point. She is somehow balanced between the stereotypes of the virgin and whore: she is sexually active but always imposed upon, and we view her as innocent in the proceedings.

She is nevertheless largely likeable throughout the book, and you do root for her happiness. Which kind of happens at the end, but being the real life of a real person it doesn’t really last. A quick summary at the end of a book feels like it cheapens the rest of the story.

And perhaps it would have been more interesting if she were more calculating. But she was likeable and the story was compelling; and I did learn about the rise of Borgia, so though I felt it rather laboured the point, some aspects of this were enjoyable.

So if you like this sort of thing, it’s pretty well put together; but I was left wanting to know a lot more about different parts of her life and of history.