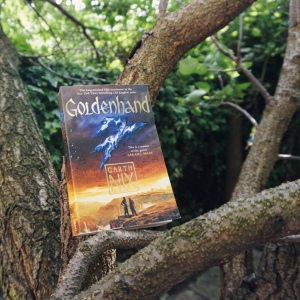 The King and Abhorsen are away again and Sam gets news from his old friend Nick across the border. From the borders of the world free magic is attacking again, and Lirael, Sam and Nick must solve more mysteries, fight old enemies and revisit old friends to defeat it once and for all.

I find I already can’t remember the plot of this too well, which is very exciting as it means I’ll get to read it again really soon. I didn’t expect that it could be as magical and as enjoyable as reading the other book for the first time (and I was a bit disappointed by Clariel as was my friend Ian) but this was a complete delight.

It’s strange as a reader to pick up a book and a story in what for you is years later, probably over a decade, and for the characters is less than a year. But I adjusted well: and it was a pleasure to find everyone as I left them. Though I had never known that another book was coming, I’d always been curious about Nick, about Lirael and about Sam, so I was delighted to fall into their lives again.

The story unfolded just as pleasingly as the others: a great blend of familiar settings, characters and magic and new ones. It maybe didn’t do anything new: it followed the fairly familiar pattern of the other books, but really that’s all I wanted.

I just thoroughly enjoyed myself here. I’d fully recommend this to anyone who read the books when they were younger, and I’d recommend the whole series to a lot of people too.

Widgets
Come see what my church is like from the comfort of your own home! In these strange times we all need connection and hope and tomorrow people will tune in together from all over the world. We’d love you to join us. #stayhome
These kids!! This wall!! Managing to take photos on Sunday after church!! Don’t look too close or you’ll see the yoghurt on their faces!! • • While I’m ignoring them writing this caption Kezia said: “Mum. I love you. An act of true love is about to happen.” Then climbed onto me and gave me a kiss.
What the Ladybird Heard.
Happy birthday @DaveGilpin!!! Scrolling through my insta feed to find any pics of you (fail 😬) but it’s not difficult to see your impact. My family, my friends, our kids, my church - all living bigger, teaching further, believing stronger, loving harder than we ever would have been without coming into your orbit. It’s also always been a lot of fun and we couldn’t be more grateful!! There’s no one like you - the craziest blend of cheekiness, faith, insight, adventure, pioneering, creative genius, lifting up, believing and true lover of people. Here’s to more adventures, more dreams, more impact, bigger family and loads more fun. Love you loads - HAPPY 60TH!!! ☺️❤️