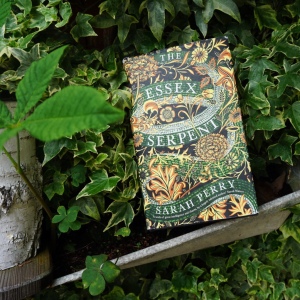 When Cora’s husband dies, she is finally freed from a domineering and cruel marriage. She explores her interests: and when hunting for the mysterious Essex Serpent which has overcome a village’s imagination, she meets a man in a field and helps a farmer rescue a sheep. To both of their amusement she’s later introduced to him by mutual friends, and they start a friendship that enriches their lives beyond measure: until it goes further than they intended. Will’s wife is dying, Cora’s strange doctor paramour is pushing the limits of modern medicine, her servant is enlisting the help of a pining rich man and falling for a poor one, and the various people grow together and apart in interesting ways.

I avoided this book for quite a long time. I saw that it was about a vicar and read enough to suspect that it was going to be rather sordid, and as a Christian and a person who knows a lot of really great vicars I’m so tired of them being portrayed in a contrary way. After a real person recommendation I picked it up, and though there were a couple of moments, this was largely a thoughtful people study of a novel, and I very much enjoyed it.

All the characters were just so interestingly painted. They were both granted intelligence and agency but also the unconscious longings that we cannot change. They were sympathetic: each of them were multi-faceted, and the interweaving of lives as it is portrayed is fascinating. I very much enjoyed the journey of all of them. Even as the characters grow closer together we see just how separate their lives are, and how they interdepend.

The Essex Serpent itself is a myth that has resurfaced in the part of Essex they are in. I’m not sure what it’s meant to symbolise: perhaps the unknown, hidden and mysterious forces and desires: the fear of the deep. As a plot device it centres the novel and adds a mystery to everything.

There was one character who was very much a plot device rather than a full human, and contrasted to the cast of beautifully painted characters this was a bit of a shame, but at least he wasn’t in it much.

I now know why there was a lot of hype about this book (though in some ways it’s such an ordinary book of ordinary people…) and would recommend it. I may even read it again.